Last week, the Stoke Poges Air Scouts and Guides made (separate) visits to St Giles’ and the results were very creative!

On Wednesday night, Stoke Poges Guides visited St Giles’ to learn about stained glass windows and had a go at making their own. Outside, Andrew told them all about the story of the main East window before they made their own tissue paper “window” depicting their promise badge. Very effective with the light shining through, I’m sure you’ll agree!

On Thursday night, the Scouts were joined by photographer Jason Candlin, from Silver Beard Images and, using torches, “painted” St Giles’ with light to produce these amazing long exposure photographs.

We look forward to welcoming the uniformed groups and their families back to St Giles’ for our family service on Mothering Sunday, 10.30am on 11th March. We will be thanking and celebrating all mums and others who nurture us. Everyone is welcome to join us. 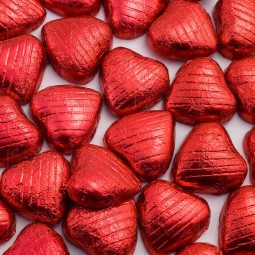 Another corker of an All Age service on 4th February saw Tina leading our thought-provoking activities, aided and abetted by Simon; a cameo role from Ruth P as “third girl with heavy backpack”; a cast of thousands presenting the Bible reading, line by line and a backpack-chocolate heart exchange, symbolising us confessing our sins to God (giving up the backpacks) and being forgiven because He loves us (receiving a heart). PLUS, Pam B took to the High Stools to give her very encouraging testimony – what a way to worship!

Pam told us about her late start in coming to faith – how a chance (God planted?) comment from her daughter prompted her to go to an Alpha course and this led to a realisation that she wanted Jesus to be part of her life. How she finds peace (more often if not always) through God and about her volunteering in prison ministry, as part of the chaplaincy to HMP The Mount, which gives her an interesting opener to talk about her faith to others. Thanks Pam for sharing your story! (More on the prison ministry and how you can support it another time – Ed.)

If you would like to “listen again” to Pam’s interview, or any of the others on the High Stools, please visit our Sermons page, here.

Our annual Beer & Skittles Evening in the main hall in St Andrew’s Church Centre last Saturday night proved as popular as ever.  Once again, we had almost 50 guys playing skittles (plus pool, air hockey & table football) and we were delighted to see so many Lads and Dads joining in the fun.  The Fish & Chip supper, desserts and drinks went down really well as everyone had worked up a great appetite. 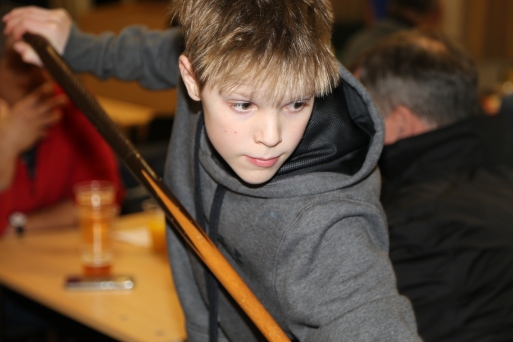 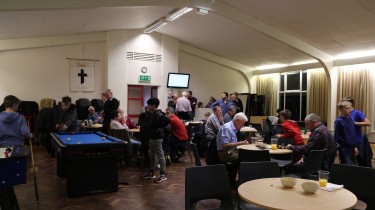 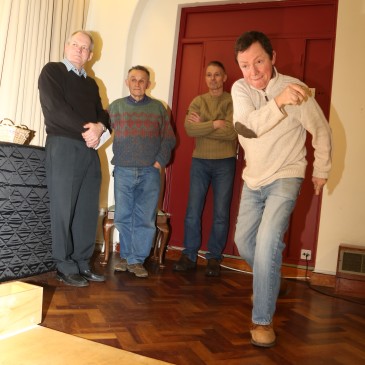 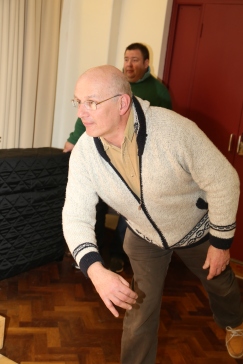 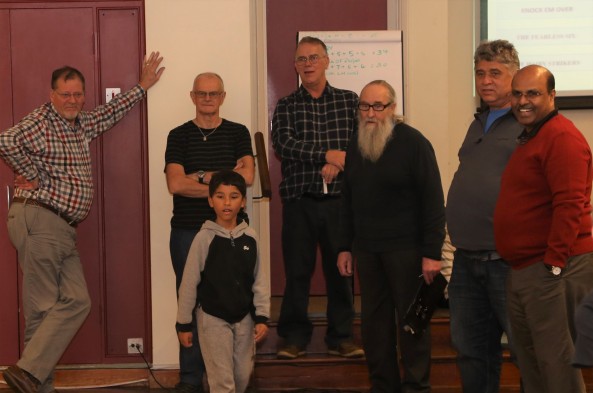 A great way to start your weekend: coffee/tea will be available from 8:15am and tasty cooked breakfast served from 8:30am. Our speaker will be Nigel Lowe, a guy who is well known to most of you. During his talk, he has promised not to tell too many “jokes”, so there will be time to hear how he came to believe that Jesus is for real and how that has impacted his life.  We should finish by 10:15am. For more information about this event and the Men’s Group, contact Tony Shortman or Nigel Lowe via the Church Office.

I very much enjoyed my visit to the “legendary” Supper Club last Tuesday evening. Sidling in to any spare seat as it became available, I was able to do a tour of the tables and get a little insight into the many reasons why people love the Supper Club – a rare evening out, friends, good food, maybe a glass of wine, no complicated agenda and, for the team of chefs and waiting staff, a feeling that you are keeping something valuable going.

A little background… In 2001, Michael Smith had discussions with Harry (new in his post as Vicar) and this resulted in starting a club for members of the congregation and their friends over 55 years of age. This took the form of a Supper Club and had the first meeting in January 2002. It immediately attracted 40 members and has been fairly consistent in number ever since. Michael Smith was the leader or chairman until his illness in 2010, when Mike Hastings and Peter Wilkinson assumed the role.

The first two events were organised by Michael & Pam Smith and Peter & Joyce Wilkinson, but they were soon joined by Roger & Gail Saunders, Sybil & Mike Hastings and Richard & Rowena Exley. In the early years Michael Smith arranged coach outings in July which included a trip to Oxford amongst others. We celebrated the tenth anniversary of the club in 2012.

The Supper Club has been fortunate in having a willing band of cooks and helpers over the years. Until recently, five of the original organisers have been at the helm. On the ex-chefs’ table I found Simone Evard, Pam Smith and Sybil & Mike Hastings and Pat Milne-Smith, enjoying the experience of being served for only the second time since “retiring”! Sadly Peter and Joyce were not present due to illness (I’ll catch them with my camera one day!) and were very much missed.

The “new” team, led by Chris Southam were hard to catch for a photo op – so diligent were they in their duties! On Chris’s regular chef team: Barbara Aldridge, Maureen Tillbrook, Sue Cahill, Chris Jeffries, Maureen White and “behind the scenes” Sue’s son and son-in-law, David and Simon. Joining this all-star cast are Daphne, Roxanne Willitts, Ruth Rooley, Jeanette Hartley, Sue Bailey and lots more who put up and lay the tables and serve the food. They seemed to be having just as much fun as those being served – from waiting at tables to washing up. Truly a labour of love, which has been ably passed from one team to the next and I’m sure has many years and many more contributors ahead.

The next Supper Club is Tuesday 20th March. Please contact the Church Office if you would like to attend or to help out.

With thanks to Peter Wilkinson for the background info. 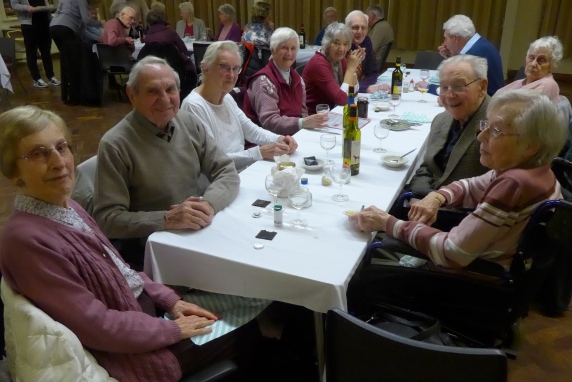 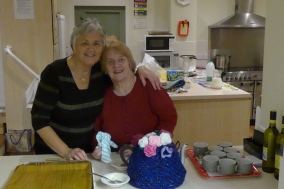