This week, looking for some Lenten inspiration, I found this post from Nick Baines, Bishop of Leeds from Ash Wednesday 2010. I have re-posted it in its entirety.

During my recent visit to Jerusalem I had a conversation with a young man on the desk of our guesthouse. We were talking about the diminishing numbers of Christians in the so-called ‘Holy’ Land when I referred to the ‘Church of the Holy Sepulchre’. He seemed puzzled until he realised I meant the ‘Church of the Resurrection’. The western churches focus on the cross/death and the eastern churches focus on the resurrection/new life.

Today is Ash Wednesday and there will be much focus on sin and misery and giving up and ‘death’ to things you enjoy. The fasting element of Lent has really given way in popular practice to trivia such as gaining added impetus to a narcissisticly-fed diet by giving up alcohol or foods that make you fat.

But all of this seems to miss the point. We focus on sin in order to move on to the forgiveness that can be received but never bought (unlike everything else in our society). Reminded of the sheer generosity of God’s freedom (‘Let there be’ – rather than ‘Close it down’), we re-engage with the world, free to live and love because we know we are all in it together.

The season of abstinence is … bookended by banquets, which is highly symbolic. For only the worldly can become godly. It is mortals who sport the ash-smudge of Lent and sinners that are summoned to repentance. Just as those who properly adore chocolate are the only ones who may truly, if grudgingly, let it go, you cannot die to the world when you have never really lived to it, for the simple reason that it is impossible to relinquish something you don’t possess.

He then goes on (provocatively) to observe:

Those who don’t love the world – and there are many Christians who appear not to – really needn’t worry about sacrificing it, for it is not theirs to give. They would do better to start at the beginning and receive the world on a plate. 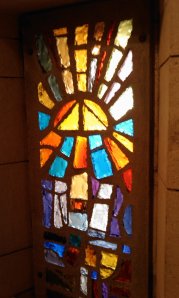 It is here, surely, that Lent bites. Not in the trivial and self-regarding games we play with ourselves in the name of ‘fasting’, but in struggling between loving the world and all that is in it and not letting that love tear us from God and truth and light. World-haters can spend their Lent looking for extra reasons to hate the world (and themselves?) – after all, there’s plenty of resource material – and confirm themselves in their ‘bury my talent and await the return of the king’ passivism. God-lovers must be world-lovers who so love the world that giving up even a bit of it is painful.

World-hating is common. It is easier to condemn and moan (which is the cultural pool in which we swim) than to get stuck in and bring about change for the better. A quick scan of the front pages of our newspapers and magazines tells us that everything is bad, all people are suspect, no one can be trusted, everywhere is dangerous. There is little celebration of ‘resurrection’, but an overwhelming celebration of what is deadly and threatening.

Andrew Rumsey puts the self-denying call to Christian discipleship in its proper context, recognising that ‘giving up’ does not mean loving the world less:

…if we seek first the Kingdom of God, then, by their demotion, the other things added unto us gain their true status as gifts.

Join us in Stoke Poges for an informal service of Ashing next Wednesday 6th March at 7.30pm in St Andrew’s Chapel. With guest preacher Helen Broadbent from St Paul’s Slough.

Click here for all of our Holy Week and Easter Services

February sweeps in so quickly, it seems, on the back of January. The shops have just finished their sales … and little red and pink love hearts start fluttering their way across shop windows signalling that the time for love and romance is upon us.  Valentine’s day is close at hand. That day when folk of all ages go gooey and send soppy cards, buy cute looking teddies and spend hours looking for the right words to express how they feel on the internet …

But what is love? I was reading an article recently, in a newspaper, and they had taken the time to ask a panel of experts to share with us what they thought love is …  So a Physicist said, “love is chemistry”, the Psychotherapist : “love has many guises”, the Philosopher : “love is passionate commitment”, the romantic novelist : “love drives all great stories”, and a Nun : “love is free yet binds us.”

I mused and digested these thoughts … trying to understand them.

Scientifically speaking when we form attachments, chemical bonds form in our brain, causing long term changes to how we think about a person, so yes I get that.  It’s the biggest difference between a crush and something more long term. Potentially lifelong, we hope, if it causes such huge changes… hence the immense pain and heartache when that love ends.  I presume the bonds in our brain are severed, that’s got to hurt! Or at the very least start pulling apart over time, to release us from the love that we chemically feel.

The guises of love that the psychotherapist identified broadened the meaning of what it is to love. It’s more than just the love between two people, who are ‘in love’. ‘Love’ only has four letters. It’s such a small word, yet it encompasses such a huge breadth of relationship types. There are so many ways to love … friendship, family, neighbourly, self. And we feel these types of love all at the same time, across a huge array of people. But that isn’t what love is …it’s who we love.

The Philosophist talks about passionately committing time and energy to love.  It needs nurturing, feeding, otherwise it won’t grow. The consequence of lack of nurture is that love dies. I get that completely, but that is not what love is … it is what love needs.

When love exists it can be a powerful force that motivates and causes actions to be taken, so it is the perfect emotion to use in story writing.  It moves things along and gives the writer a vehicle for driving the plot along many twisting and winding roads. But is love just a powerful force that shapes real life stories? There are so many other emotions that have that same potential and create about a good story. If love is limited to being just a plot devise in our lives then that would make it a one dimensional, flat existence really. I’m not convinced by that thought.

Then we get a Christian perspective from a Nun … ‘love is free yet binds us’. I look and I stare at her words. They are hard to take in. What does she mean? For me I see something that I can’t see quite so easily in the other viewpoints.  I see love as a complete and separate thing that exists beyond us.  It is free, so it has no-one and nothing that it has to part of to exist. It just is.  Yet this thing we call love, which doesn’t seem to need us is vital and necessary for us to be brought close to one another.  It binds, so it ties us closely to each other.  It gives us the capacity to be in relationships with one another through itself.  There doesn’t seem to be any benefit to this thing called love for doing it. Yet it does it anyway, for us. We gain so much from this love thing.  Friendships, kindness, compassion, companionship, passion.  It asks for nothing in return. I think I’ve worked out what love is … It’s Jesus.

We will be starting our sermon and life group series, Paraclesis: Journeying Together on 24th February. This series, developed by CWR, “encourages people to come alongside others who are struggling with life’s challenges. It offers the Church a fresh perspective on pastoral care and journeying together – the way that God journeys alongside us.”

Our aim as a Church family is to challenge ourselves afresh, grow spiritually and re-invigorate our daily lives so that they truly reflect the journey we are on with Jesus.  This season of teaching will help us to dig deeper into the gospel and give us practical, usable ways in which we can live out the life we have been inspired to live by Jesus’s story.

We all long to be fired up, passionate, caring people, shining out the love of God to all we meet, but sometimes it can be hard to know how to do so, in an appropriate way.  Therefore over the course of this six week series we intend to journey together, affirming one another, and encouraging each other’s endeavours so we can truly answer such questions as ‘Who Cares?’ with ‘We Care’; backing those words up with actions inspired by God’s heart for our community.

Each Sunday’s sermon teachings will be followed up by the Life Groups that week and there will be an Open Group at the Vicarage on Thursday evenings starting 28th Feb from 7.30-9pm. Please speak to Natasha if you would like to join in.

There are 6 sessions in the series:

To watch an introduction to the series, click here.